The actual conductivity value of a water based solution containing a single salt is determined by the concentration of that salt, the solution temperature and the type of salt. 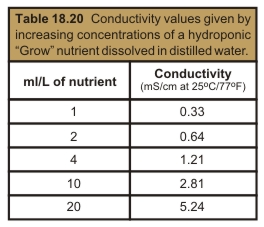 With relatively dilute solutions of soluble salts (i.e. up to 100ppm or so), if the concentration is doubled, its conductivity also doubles. At higher salt concentrations however, this strict proportionality (i.e. linearity) deteriorates. For example, Table 18.20 demonstrates that there is a better linear relationship between concentration and conductivity from 1 to 2 g/L compared to 10 and 20 g/L.

A consequence of this linearity feature is that simple arithmetic can be used to calculate the approximate conductivities which would result from soluble mixtures between solutions of known conductivity. For example:

a) If a 2.0 mS/cm water is diluted with an equal amount of ‘distilled’ water (zero mS/cm), the result would be approximately 1.0 mS/cm.

The impact of salt ‘type’ upon the EC value is further emphasized when the EC of typical ‘natural’ waters (i.e. uncontaminated water) is compared with that of an inorganic nutrient solution of equal concentration. For example, an uncontaminated bore water containing 1,000ppm of salt will typically yield an EC of ~1.8mS/cm. However, an inorganic nutrient solution of the same EC will in fact contain ~1,600ppm of salts. The reason for this is inorganic nutrient mixtures have much higher concentrations of the heavier substances like potassium and phosphate compared to natural water and therefore have fewer ions to carry the electric current. Bore waters however, typically contain numerically more ions of lighter salts like sodium and chloride. Thus, the electrical mobility of these individual ions in water are not that different. Rather, it is the total number of ions present that determines the conductivity.

Hence, when following EC recommendations in hydroponics, consider the composition of all additives. Flowering additives that contain a large proportion of phosphate yield a relatively low conductivity. Consequently, their addition to the nutrient solution will produce a smaller increase in conductivity than a normal inorganic nutrient mixture. Also, note that additives that claim to be 100% organic should contain no salts, and their addition would therefore produce no increase in conductivity when added to a nutrient solution.