Ca-Mg-Fe prevents plant nutrient deficiency symptoms, especially where “high pH” waters are used or when nutrient solutions are subject to volatile changes in pH and EC. 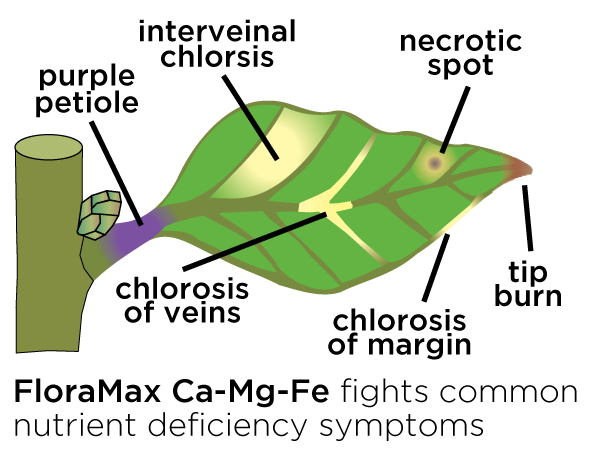 NOTE: Avoid using Ca-Mg-Fe with VegaFlora A+B or Veg-1 as these elements are already included and an excess will likely cause complications.

FAQ
When using FloraMax, do I need a “cal-mag”?  No, the FloraMax line is designed to eliminate the requirement for additional “cal-mag” additives as its built into our base nutrients and Flowering Enhancer product.  Over hundreds of test grows during the development phase there was never any need for a dedicated cal-mag additive. Furthermore, use of additional “cal-mag” may result in excessive calcium precipitate leading to clogged lines or build-up in the reservoir.

Why then does FloraMax manufacture a “cal-mag”?  To address the deficiencies found in competing brands.  We are committed to helping growers achieve their best results regardless of the nutrient regime they follow, our Ca-Mg-Fe product is ideal for use with other regimes.

Testimonials - “Ca-Mg-Fe has really helped to keep our plants strong with consistent weight and crop speed...”

“Without Ca-Mg-Fe the growth would stall and there were all types of foliar issues like twisting and dead spots. Now our plants are fully lush all the way through!”

“With our hard water we were regularly having problems. First there were foliar symptoms and then diseases and pests would take over… The Ca-Mg-Fe has really helped to keep our plants strong with consistent weight and crop speed”

Monitor plants closely for symptoms of nutrient deficiency. These symptoms can provide a valuable forewarning of serious problems within the growing system. Be aware that there are many factors that cause nutrient deficiency symptoms in a plant. The nutrient itself is usually not the cause.

1. Stunting of growth:  As all “essential” nutrients are simultaneously required for healthy growth, this symptom can be attributed to a deficiency in any one or more of them.

Chlorosis & interveinal chlorosis:  Chlorosis can result in the whole plant or leaf turning light green or yellow. It can also be more localized. For example, yellowing of the veins themselves or between the veins (“interveinal chlorosis”). Chlorosis occurs due to plants being deficient in elements required for photosynthesis or chlorophyll production.

3. Purple / red discoloration: This often occurs on stems or along leaf petioles, veins or margins. It occurs due to abnormal levels of anthocyanin that accumulates when plants are stressed. These symptoms can also be caused by physical stresses such as cold, drought and disease.

4. Necrosis:  Generally happens in the later stages of deficiency where the affected plant part becomes stressed to the point that it becomes brown and dies.

5. Other:  Further symptoms include:

A key indicator for identifying nutrient deficiency is whether the symptoms are occurring in older growth, younger growth, or both.

Mobile elements are able to move out of older leaves and into younger plant parts when a deficiency is present. Hence the symptoms usually occur first in the older (usually lower) leaves. Mobile elements include N, P, K and Mg (see diagnostic flow chart).

In contrast, immobile nutrients are not able to move quickly from one plant part to another. Therefore, deficiency symptoms are initially most obvious in younger growth (usually higher up the plant). Immobile nutrients include Ca, S, Fe, Cu, Mn, Zn and B (see diagnostic flow chart).

The appearance of foliar deficiency symptoms often causes inexperienced growers to conclude that the nutrient solution is deficient in a particular element. However, if a ‘complete’ nutrient formulation is being used, check the following before settling on this conclusion:

For more see page 67 of the FloraMax Hydroponics Manual.